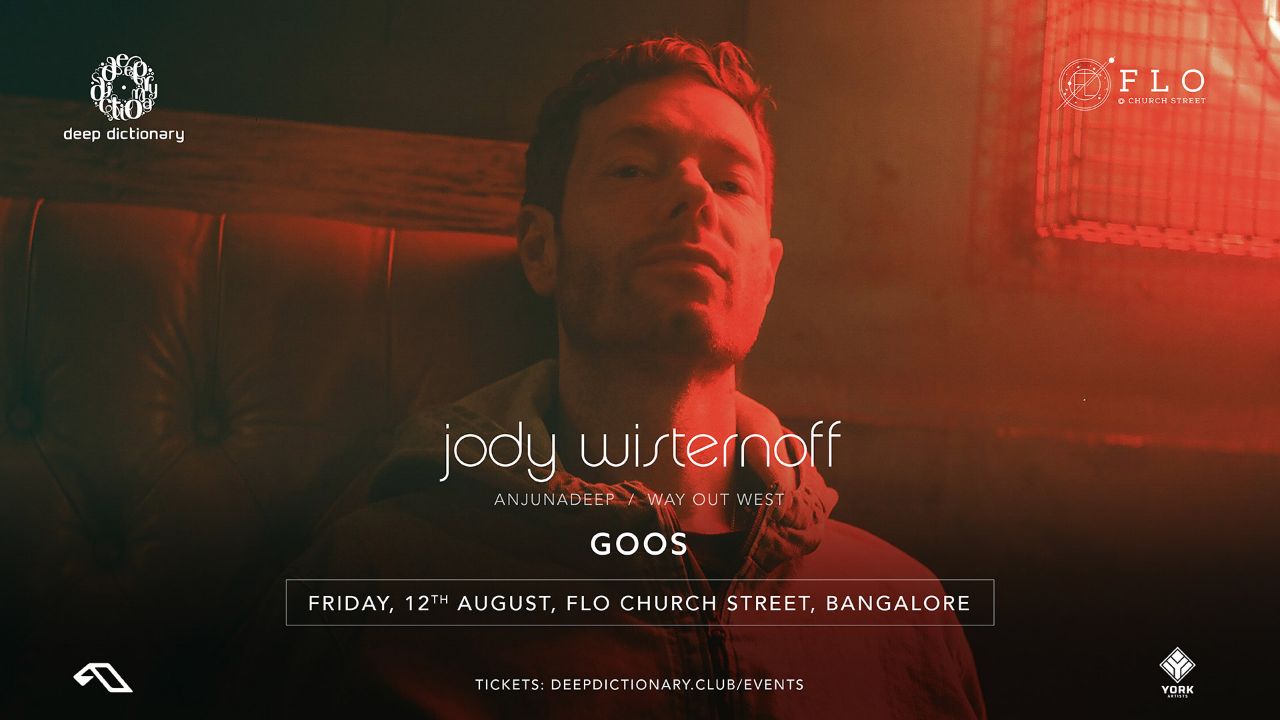 The big daddy from Anjunadeep Jody Wisternoff will perform for a limited capacity event in Bangalore on the 12th August (Friday) !

He may no longer be the “precocious” teen who cracked the music industry, but Jody Wisternoff is still not afraid to push the boundaries or test his own limits. One half of Bristol’s veteran house and trance group Way Out West, producer and DJ Jody Wisternoff has also maintained a solo career, remixing artists while releasing his own productions

of nostalgic house music. Wisternoff launched his career in 1986 at the age of 13 when he became a finalist at the DMC World DJ Championship; two years later, he joined his brother Sam in the hip-hop crew “True Funk Posse”.

Fast forward to the present day though and despite having four successful albums under his belt as Way Out West, Wisternoff shows no signs of complacency. He is constantly evolving his sound with new tracks and showcasing fresh and experimental electronic music with a string of solo singles on imprints like Anjunadeep along with label manager James Grant. He’s mixed several volumes of the label’s eponymous compilation series and is considered one of the undisputed prodigies in Deep House.

– Wristbands removed or tampered with will be rendered invalid and WILL NOT be replaced.

– No refund on a purchased ticket is possible, even in case of any rescheduling. Beware of fake / counterfeit / colour photocopied tickets. A ticket shall not be a valid ticket if the barcode / QR Code / hologram has been tampered with. Unlawful resale (or attempted unlawful resale) of a ticket would lead to seizure or cancellation of that ticket without refund or other compensation.

– Duplicate tickets will not be issued for lost or stolen tickets.

– Entry permitted to patrons of legal age(18+ only). Patrons below legal age will not be permitted in the venue premises.

– No alcohol will be served to patrons under legal drinking age. Alcohol will only be served on display of a valid ID proof. If you intend on drinking at the venue, we recommend you use public transport or assign a designated driver to drive you to and from the venue. In case a patron below legal drinking age is caught drinking alcohol he/she shall be required to forthwith exit from the event.

– No drug use – consumption of narcotics is illegal and those found in possession of or consuming narcotics at the event will be handed over to police authorities. Persons suspected of carrying items that may be used in an offensive or dangerous manner, or carrying out illegal activities within the site may be searched.

– Strobe lighting at this event may trigger epileptic fits. Those with a history of epilepsy or any health condition that would be of concern must take adequate precautions. This event uses amplified sound. Wear hearing protection at live concerts to reduce the risk of hearing damage.

– Artist programming and lineup is subject to change during the event.

– The organizers reserve the right without refund or other recourse, to refuse admission to anyone who is found to be in breach of these terms and conditions including, if necessary, ejecting the holder/s of the ticket from the venue after they have entered the ground.

– Any disputes to be settled under Bangalore jurisdiction courts only.

– Rights of admission reserved, even to valid invitation holders. For enquiries contact: hello@deepdictionary.club

We use cookies on our website to give you the most relevant experience by remembering your preferences and repeat visits. By clicking “Accept”, you consent to the use of ALL the cookies.
Do not sell my personal information.
Cookie settingsAccept
Manage consent

This website uses cookies to improve your experience while you navigate through the website. Out of these, the cookies that are categorized as necessary are stored on your browser as they are essential for the working of basic functionalities of the website. We also use third-party cookies that help us analyze and understand how you use this website. These cookies will be stored in your browser only with your consent. You also have the option to opt-out of these cookies. But opting out of some of these cookies may affect your browsing experience.
Necessary Always Enabled
Necessary cookies are absolutely essential for the website to function properly. This category only includes cookies that ensures basic functionalities and security features of the website. These cookies do not store any personal information.
Non-necessary
Any cookies that may not be particularly necessary for the website to function and is used specifically to collect user personal data via analytics, ads, other embedded contents are termed as non-necessary cookies. It is mandatory to procure user consent prior to running these cookies on your website.
SAVE & ACCEPT